The Day of Jumu’ah

Just three weeks ago we celebrated the most important day of the year, the Eid al-Adha [Festival of Sacrifice], but it is important to remember that every week during the year we have a similar day, a day known as Sayyid al-Ayaam, the Lord of the Days, as described by the Prophet (may Allah’s peace and blessings be upon him), and as an Eid according to Umar (may Allah be pleased with him). The day of Jumu’ah in the week is what the Day of the Eid is in the whole year: It is a day of celebration, a day in which joy and happiness descend upon the hearts of the believers. A day that Allah loves and has made special by putting in it secrets and rewards for those who seek them.

The most important secrets are related to its main act, the act that gathers Muslims and unites the community. This act is, of course, the prayer of the Jumu’ah, whose correct establishment has always been fundamental to the strength and well-being of the Muslim Ummah [community].

Its first necessary element is to take a Ghusl [full-body ritual purification] before going to the mosque. And it is important to know that this is much more than merely a recommended act: it is a highly emphasized Sunna. The Prophet (may Allah’s peace and blessings be upon him) said:

“Do Ghusl on Jumu’ah, for whoever takes a Ghusl on the day of Jumu’ah will be forgiven for all the wrong actions he has committed from one Jumu’ah to the next, as well as for three more days.”

The second element is to carry out what is known as the five acts of Fitra [primordial human nature] the morning before going to the Jumu’ah congregation. The Prophet said in a Hadith narrated by Abu Hurayra: “There are five things that are Fitra: cutting the moustache, cutting the nails, shaving the pubic hair, shaving the hair from the armpits and using the Siwak [teeth cleaning twig].

The third is to wear the best clothes we have and wear good perfume. It is a day of Eid, a celebration, and we gather in the House of Allah. What better occasion than this to get into shape? Allah says:

“Put on your best and purest garments in every place of prayer.”

“On the day of Jumu’ah, the duty of a Muslim is to use the Siwak, wear his best clothes and use whatever perfume he has.”

The fourth is to arrive early at the mosque, for that is the greatest reward. The Prophet said in a known Hadith:

All this relates to those who arrive early, in other words, those who arrive before the Imam [person who delivers the Khutba, i.e. the Jumu’ah speech, and then leads the prayer]. Whoever arrives after the Imam loses this reward. The time before the Khutba of the Jumu’ah is one of the most special moments of the whole week, when the angels stand at the door of the mosque, recording all those who arrive early and their actions. We must take advantage of these moments to reflect, recite Qur’an or make Du’as [to call out to Allah, “the very essence of worship”].

Then, when the Imam enters, one must stop talking. Not even a greeting is returned, not even a gesture. When the Khutba begins, one must pay full attention to what is said, without being distracted by anything. It is an obligation for every Muslim, man or woman, during the whole duration of the Khutba. The Prophet (may Allah’s peace and blessings be upon him) said:

“Even saying to your companion: ‘Keep silent!’ while the Imam is speaking on the Day of Jumu’ah is useless talk.” And he added in another Hadith:

“Whoever speaks (during the Khutba) will not have Jumu’ah.” In other words, his Jumu’ah will not be valid.

And this is why, according to Imam Malik, and based on the practice of the People of Medina, two Rakats of Tahiyatu-l-Masyid [two prostrations on entering the mosque] should not be done when the Imam is already on the Mimbar; to do so is like leaving a Fard for a Sunna, like not praying Dhuhur (obligatory) in order to pray the Duha prayer (voluntary). This is because it is obligatory to listen to the Khutba, since it contains words from the Qur’an. And Allah says:

“When the Qur’an is recited listen to it and be quiet so that hopefully you will gain mercy.” (Surat Al-A’raf 7:204)

According to the Mufassirun [authors of an interpretation of the Qur’an], one of the causes of the revelation of this verse is that it descended alluding to the Khutba and the silence that should be kept during it.

Then, having finished the prayer, and after greeting, we should leave the Mosque. Allah says in Surat al-Jumu’ah:

“Then when the prayer is finished spread through the earth and seek Allah’s bounty” (Surat 62:10)

This order, according to the Mufassirun, such as Al-Qurtubi and At-Tabari, does not constitute an obligation, but is a Rukhsa [concession] or an Amr Ibaha [not obligatory], i.e. something permissible. But it was the Prophet’s Sunna, since he used to leave the Mosque and went home to do Nafila (voluntary) prayers after Jumu’ah. Those who do Rakats in the Mosque should at least do it in such a way that they do not hinder the passage of those who leave the Mosque.

The rest of the day it is recommended to visit relatives, to strengthen human ties, to remember Allah and to be generous. We ask Allah to grant us all the benefit of this day! Amin.

In the first part of the Khutba we talked about the most important aspect of today, the Jumu’ah prayer. But there are other aspects of this day to which we must also pay attention:

The first aspect is what is called Sa’atu al-Istijaba: the Hour of Answer, a time when Allah accepts the Du’as of all who supplicate to Him. This time is hidden in the course of the day. The Prophet said:

“There is a moment during it (i.e. the day of Jumu’ah) when Allah gives to a praying Muslim everything he asks for. And he indicated with his hand that it was a very short time. The exact time of this moment is unknown, but we should especially look for it between the times of ‘Asr and Maghrib, and fill that period with Du’a, because the Prophet (may Allah’s peace and blessings be upon him) stated:

“Seek that moment awaited in the day of Jumu’ah in the time between the prayer of Asr and Maghreb.”

The second aspect is the recitation of Surat al-Kahf, especially during the night before, or during the period before the prayer. The Prophet (may Allah’s peace and blessings be upon him) said:

“To the one who recites Surat al-Kahf on the day of Jumu’ah, a beam of light will be given that will shine under his feet toward the sky, illuminating him on the Day of Judgment, and all wrong actions he commits from one Jumu’ah to another will be forgiven.”

The third is Salawat [prayers] on the Prophet, especially between ‘Asr and Maghrib, the time we mentioned earlier to do Du’a. This is and has been one of the practices of the people of Dhikr. The Prophet (may Allah’s peace and blessings be upon him) said:

And finally, Jumu’a is a day in which the acts of Sadaqa [giving to the needy] carry much more weight than on other days.

We ask Allah to give us the strength and sincerity to make the best use of this day and not miss any of its moments!

And we ask You to accept our Jumu’ah and make it a means of uniting the hearts of Muslims in this city and uniting them with a common purpose of raising the Din and establishing it in its fullness!

We ask You to accept our Du’as and make them coincide with the Sa’atu al-Istijaba! 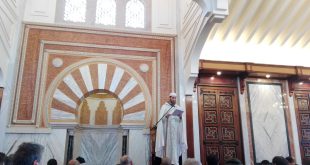 The Favour of the Intellect

The Favour of Language