The entrance ceiling of the Great Mosque of Granada

The Great Mosque of Granada was inaugurated on July 10, 2003. On that date all the interior decoration and exterior details of the Mosque had been completed, with the sole exception of the entrance hall, which was incomplete; in the absence of being painted.

The design of the decoration was designed by the Spanish architect magnificent Muslim Sidi Karim Viudes of Murcia (1929 – 2014), may Allah have mercy on him.

In 2016 the work was completed at the hands of the artist Daud Al Mursii, also Spanish Muslim from Murcia.

The roof is made of 2,400 assembled pieces of wood. 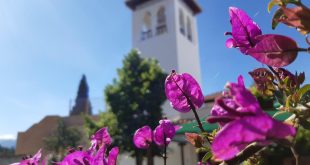